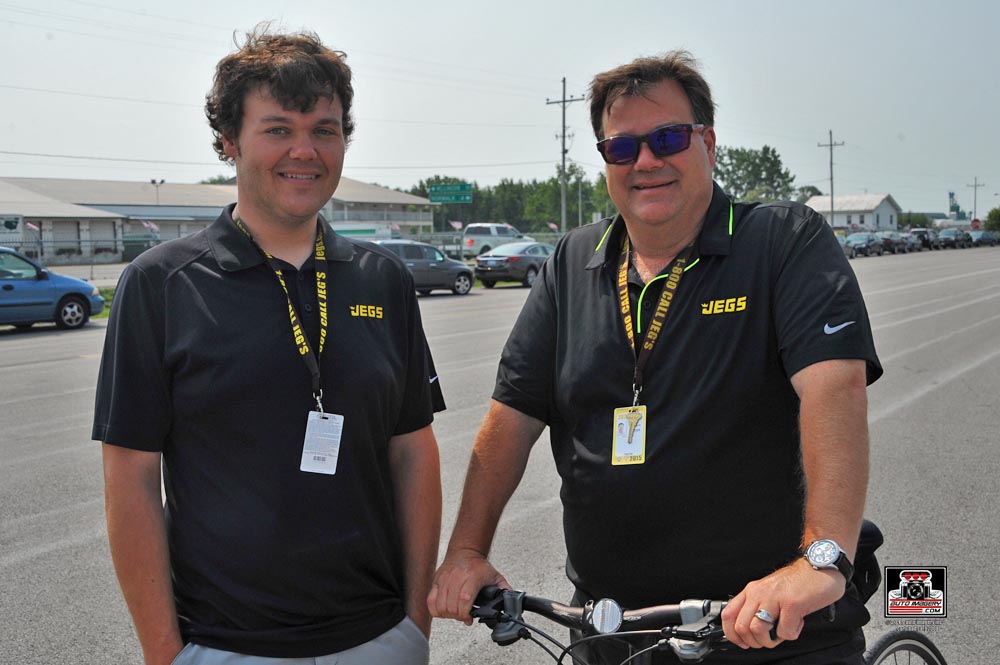 Plus, Troy Sr. moved into second place in the Pro Mod points standings, only five out of the lead.

Father and son faced each other in the semis, with Troy Jr. getting the jump on dad at the start, but Troy Sr. powered through to the victory.

In the final, Troy Sr. had problems and had to lift early, handing the win to Mike Janis.

Still, after qualifying No. 16, Troy Sr. had a strong rebound during eliminations.

"We knew once we got the gremlins fixed, we've have a good, fast racecar," Troy Sr. said. "When it ran good in the first round against Rickie (Smith) and came back and repeated in the second round, we were like, 'All right, cool.'"

But in the semifinal against Troy Jr., Troy Sr. had engine problems at the finish line. The JEGS.com Corvette slid in its own oil in the shutdown area as Troy Sr. fought to slow it down. He was able to get it stopped, but the team had a big task to change engines for the final.

"In the semis, we had a snafu and hurt some parts and pieces, but that's all part of racing," Troy Sr. said. "The guys came back – Kyle Pettus, Mike Rees, Justin Beaver, Brandon Stroud – and did a nice job. They got this thing all back together.

"We're not sure what happened in the final, but runner-up's not bad. There's only one other guy who wouldn't want our spot, so we'll take it."

Troy Jr. is sixth in points in what has been a solid rookie season. But Troy Jr. is a racer and isn't satisfied with semifinal finishes.

"It looks good on paper, but not in my heart," Troy Jr. said. "Our potential was a lot higher than our results, but at least we got Pops in the final."

Troy Jr. qualified No. 12 and beat No. 5 qualifier Jim Whiteley in the first round Saturday. Sunday, he knocked out No. 4 qualifier Bob Rahaim in the second round, cutting a .044-second reaction time before having to pedal his car as Rahaim sped ahead.

Still, it was a treat to race his father.

"Wish we would've had something for him," Troy Jr. said. "It's pretty neat, it's majestic. I grew up watching him by the fence, so it's pretty cool. I cheer for him, and he roots for me, but deep down, if you ask us when we're about to stage, it's a little different."

Troy Sr., too, treasures being able to race his son.

"It was pretty cool," Troy Sr. said. "It was cool to race T.J. We just need to get his car picked up a little bit."