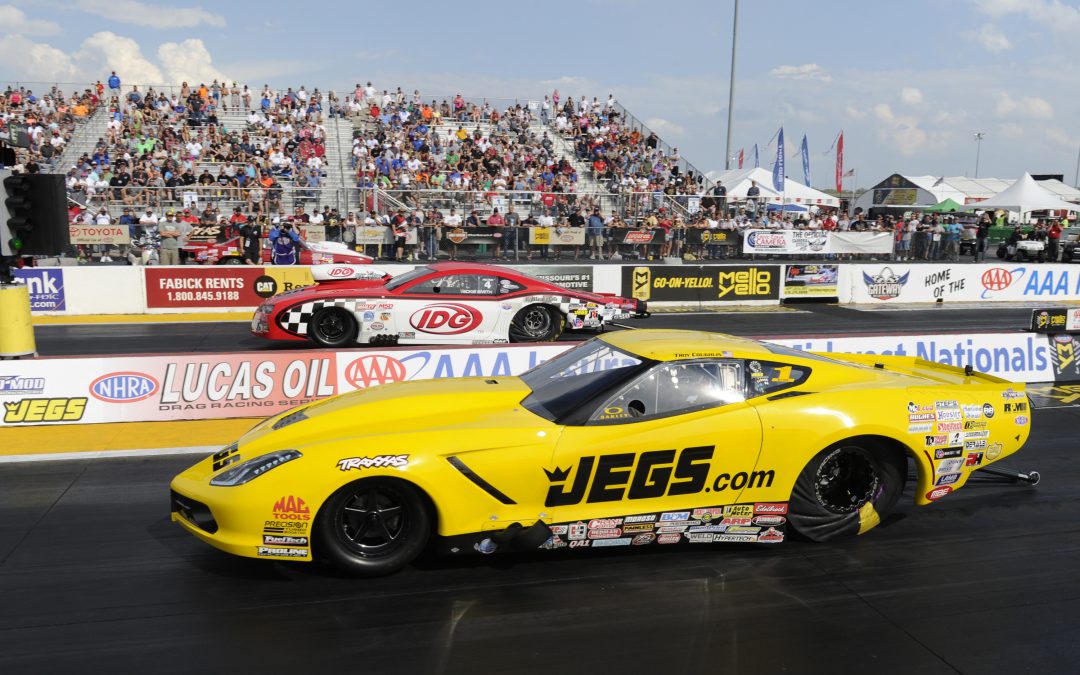 ST. LOUIS (Sept. 25) – The final round of the J&A Service NHRA Pro Mod Series race presented by Precision Turbo & Engine at the NHRA AAA Midwest Nationals on Sunday at Gateway Motorsports Park was a race for the ages.

In the left lane was two-time Pro Mod champion Troy Coughlin Sr. in his JEGS.com Corvette, while two-time champ Rickie Smith raced in the right lane.

This time, the win light came on in Coughlin's lane, giving him his second Pro Mod victory of the season and eight of his career.

"You’re racing a legend, you’re racing a champion, you’re racing a tough, hardcore racer that drives the truck, tunes his race car – he does it all," Coughlin said. "Some people say that we are rivals. It’s pretty cool to be on that same level. Rickie’s tough.

"This round, I knew that we had a pretty fast car and I knew if we could just leave with them, I think we should be in pretty good shape – and we left a little ahead of them. (Crew chief) Steve (Petty) , Mike (Rees) and Kyle (Pettis) had this thing tuned up and ran a 5.80, which is faster than we ran in the semis when we ran an .83 so that’s pretty neat. It’s fun going into the last race on a wave and nipping at his heels as we say."

Coughlin was talking about the Pro Mod championship battle, which will go down to the final race of the season, in Las Vegas, between – who else – Smith and Coughlin. Smith holds a sizable lead and simply needs to qualify for the Vegas race to win the title, but Coughlin is ready to pounce.

Coughlin won the St. Louis race from the No. 15 qualifying spot, getting in the field in the final qualifying session. He then beat Bob Rahaim in the first round Saturday night before taking out Steve Matusek and Khalid AlBalooshi to reach the final against Smith.

"It just shows how competitive the Pro Mod class is here in the NHRA," Coughlin said. "We qualified 15th and made some decent runs, but it’s real exciting, especially coming from the 15th spot. We came back, ran fast and won.

"The cars are running consistent. The guys down at Pro Line building us the engines are doing an excellent job. Steve tuning this thing, Mike and Kyle, what can I say about those guys?  All the people at JEGS.com, and our JEGS Track Tested partners, it’s bad ass. We are nipping at Rickie’s heels. "