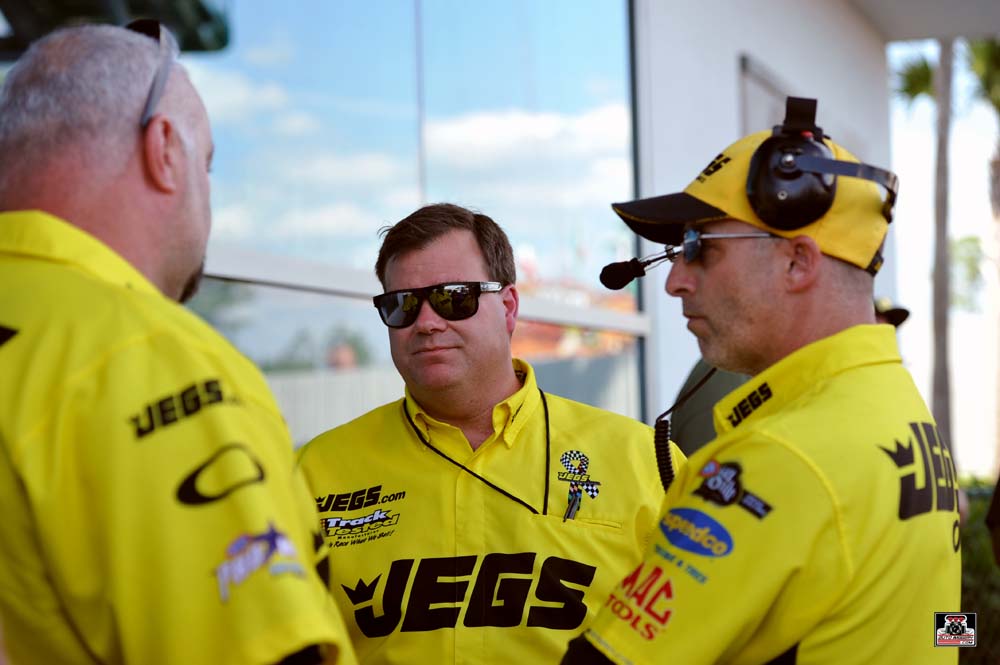 And after what appeared to be a staging duel – but actually wasn't – Coughlin fell in the second round to defending Pro Mod champion Rickie Smith.

Coughlin faced No. 4 qualifier Jason Hamstra early Sunday morning in the first round, but the 2012 Pro Mod champion was hardly asleep, as he pulled off a stellar .032-second reaction time.

That put Coughlin, the No. 13 qualifier, against No. 5 qualifier Smith in a battle of the two most recent Pro Mod champs. Both drivers lit the pre-stage bulb but then sat on the starting line, neither staging.

The fans cheered the apparent staging duel, but Coughlin was having a problem inside his Corvette.

"I wasn't ready to stage, and we actually had a problem with the transbrake," Coughlin said. "It wasn't engaging, so thank God he didn't stage, or we might have been in a little bit of trouble with that one."

Finally, Coughlin got the transbrake to engage, and he spooled up the turbochargers and staged. He and Smith had nearly identical lights, but Coughlin soon ran into trouble.

"The car took off, and I felt like it was running pretty nice," Coughlin said. "We were both pretty close on the Tree, and then it just started bobbling the front end. All of a sudden the front end started coming up, and I said, 'It's not supposed to do that,' so I started pulling my foot back."

The sudden lift of the front end caught the veteran Coughlin by surprise.

"I didn't expect that to happen, where normally, I'd be ready to work the brake pedal or work the gas pedal," Coughlin said. "Man, you're in eliminations in the heat of the battle. You're foot is welded to the floor, so you're not letting off. But I'll get better at it."

"I could see him, and he was a good half car in front of us at that point," Coughlin said, "so I figured, 'Well, we'll just wait for Houston.'"

The Pro Mod series doesn't race again until the NHRA SpringNationals on April 25-27 in Houston. Coughlin said his Steve Petty-led team will go over the car and hope to find some room for improvement.

"That's next on the list," Coughlin said. "We'll fix a few things and put it back in line."