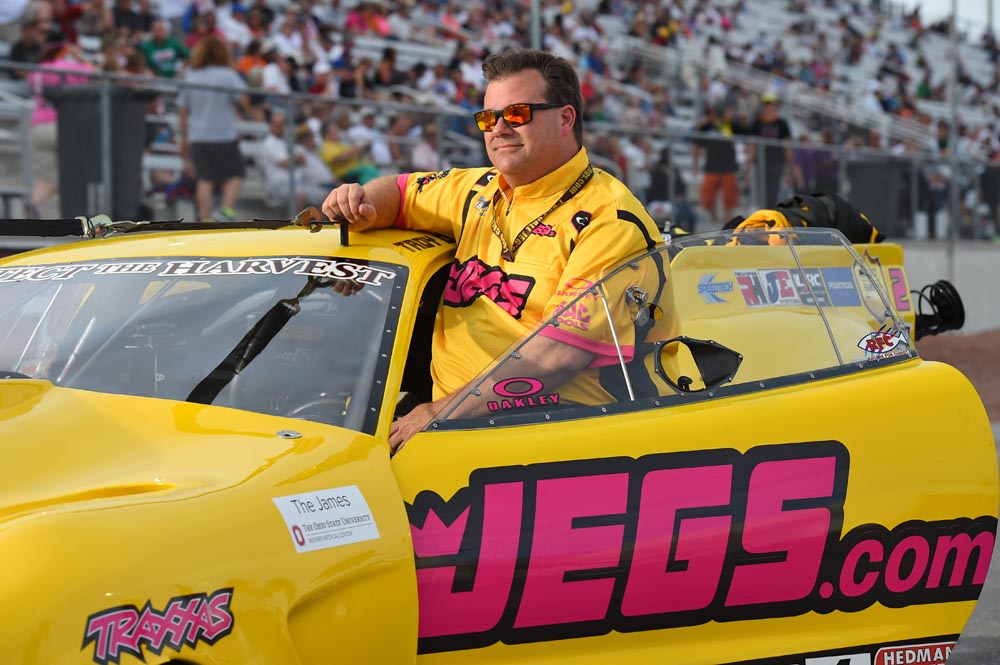 LAS VEGAS (Nov. 1) — The path to a second Pro Mod championship for star driver Troy Coughlin has become crystal clear after one round of eliminations in the Pro Mod Drag Racing Series presented by Aeromotive. Coughlin, the 2012 champion, must win the event and set a national record Sunday, and hope that points leader and reigning titlist Rickie Smith loses in the quarterfinals for the title to change hands. It's that simple.

"There's still a chance so we'll keep racing hard," Coughlin said. "As cool as it's been, I don't know that a record run isn't out there. It could happen if it stays overcast like this and this tailwind keeps blowing. It's fun to think about, at least for one more night."

"He was vulnerable, for sure," Coughlin said. "Unfortunately for us, Danny had more problems than Rickie and couldn't get down the track. That would have been a huge upset, especially with how strong Rickie has been all year."

The remaining ray of hope, however, is that Smith's off-kilter pass gave lane choice to Richard Snavely, who will face Smith in the second round. Snavely posted a 5.934 at 253.14 mph in beating Dan Stevenson.

"Maybe Richard will do us a favor," Coughlin said. "No matter what happens it's been a good year for the JEGS.com race team. We've been running strong the latter part of the season and that's been exciting. If we could have won more rounds in the early part of the schedule, maybe the story would be a little bit different now.

"Either way, you can't take anything away from Rickie. The guy works hard just like we all do. He did a good job of winning rounds, being fast when he needed to be and pulling it out of his back pocket when necessary. Hats off to him and all those guys over there."

While besting the national record of 5.772 seconds — and earning the 20 bonus points that come with it — remains a bit of a longshot, Coughlin says there is no quit in his race team.

"We're still in this deal and I think it's going to be a pretty good day tomorrow," Coughlin said. "We've got a pretty fast hot rod. Steve (Petty, crew chief) has this thing tuned up and we'll be a force to reckoned with for sure. Hopefully we can go out there and take home the win. If the racing gods smile on us, we may be champs again as well."

The second round of Pro Mod eliminations begins at 12:45 p.m.