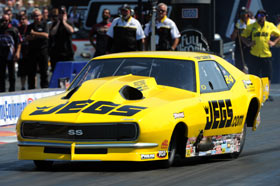 NORWALK, Ohio (July 7) — With a legion of yellow-clad JEGS associates and fans rooting him on, Troy Coughlin has delivered plenty of excitement this weekend in the NHRA Pro Mod Series presented by ProCare Rx, qualifying No. 1 and winning a first-round race against Mike Knowles to carry favored status into Sunday’s action.

After a stuttering start in Friday qualifying, Coughlin’s twin-turbocharged JEGS.com Camaro roared to life Saturday morning, posting a 5.949-second run at 250.64 mph to easily earn the No. 1 designation.
“We felt as if we had a competitive car coming into this race,” Coughlin said. “We started off in qualifying by losing traction a little bit, so we had some work to do. We came back in the second run and we broke a rear end about half-track. The good news was that the incremental times looked pretty good to run 6.05 or so, so we knew we were in good shape.
“This morning we read the track and made a couple adjustments to it, and ended up with a great run that put us on the pole. We were the second car out, so we had to sit and wait all session to see what happened. But it stuck and stayed No. 1 by four-hundredths, which was nice.”
Perhaps knowing he needed a big pass to upset the top qualifier, Knowles had his “Blown Money” car too hopped-up for Round 1 and he broke the blower belt during his prerace burnout, rending his hot rod powerless. Coughlin still staged and attempted a pass, although when his front end started rising near the 330-foot timer, he smartly shut off to avoid an accident. He eventually posted a 6.180 at 223.32 mph and will now face Donnie Martin in Sunday’s quarterfinals.
“We rolled into first round on a little bit greasier race track, which we adjusted for,” Coughlin said. “The JEGS car was hustling but it started picking up the front end so I cut it back a little bit. I decided not to take a chance at hurting the engine and just kind of let off. We still ran a 6.18, which is pretty quick.
“We’ll tune this run for tomorrow. The weather’s supposed to be a little cooler, so that’s going to bring the track and the atmosphere to this thing to make it faster.”
The second round of Pro Mod qualifying is slated for 12:15 p.m.
“It is pretty cool to see a lot of the JEGS shirts and hats in the stands and to get the thumbs-up from people,” Coughlin said. “We see a lot of people we’re working with at JEGS, a lot of their family and friends. We’ve probably got close to 500-600 people here. It’s neat.”
–30–
Media Note: Additional information is available at the following locations:
<http://www.teamjegs.com/>
<http://www.jegs.com/>
<http://www.facebook.com/TeamJegs>
<http://www.facebook.com/Jegsperformance>
<http://twitter.com/#!/teamJEGS>
<http://twitter.com/#!/JEGSPerformance>
Media Contact:
Scott “Woody” Woodruff
JEGS, Director of Media & Motorsports
Office: 800-345-4545 (#3, ext. 412)
Mobile: 614-595-1820
Fax: 740-362-5507
Email: jegspr@aol.com or scott.woodruff@jegs.com