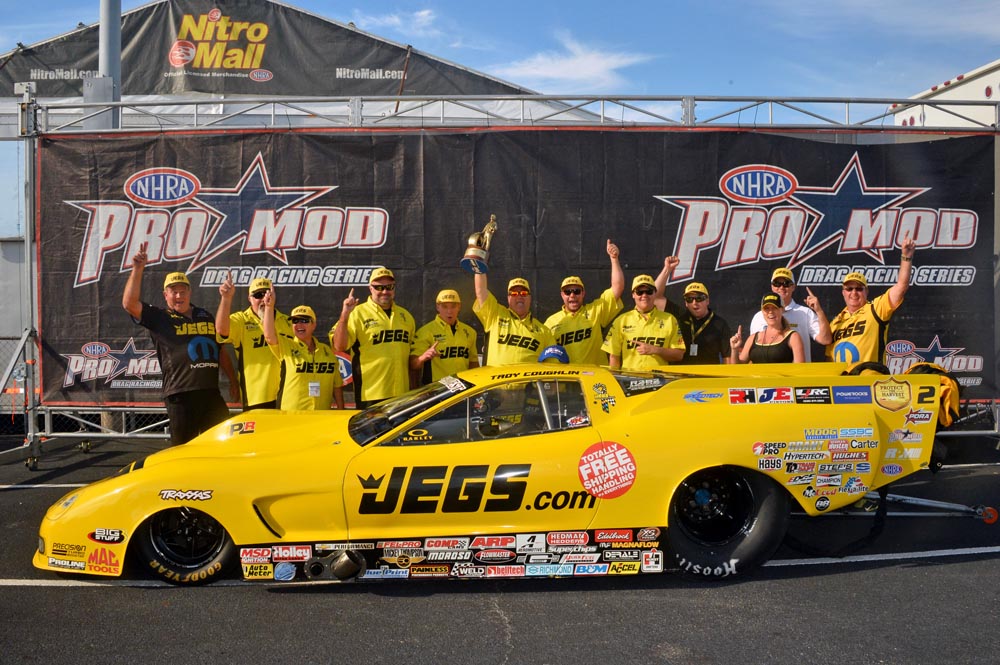 ST. LOUIS (Sept. 27) – JEGS.com driver Troy Coughlin held the Wally trophy two weeks after the race was supposed to run, but the victory in the Powerrocks NHRA Pro Mod event was still sweet.

Coughlin scored his second win of the season Saturday, beating Mike Janis in the final round of the NHRA Carolina Nationals – a race completed during the AAA Insurance NHRA Midwest Nationals at Gateway Motorsports Park this weekend.

Coughlin, who won earlier in the year in Norwalk, Ohio, also closed the gap on the Pro Mod points leader Rickie Smith with the Charlotte win. Unofficially, Coughlin is 59 points behind Smith and four behind Janis. Only the St. Louis and Las Vegas races remained on the 2014 Pro Mod schedule.

"We're getting closer, we're inching up on Rickie's heels," Coughlin said. "We're chewing on Rickie's heels, as they say. He has done an awesome job this year, but we want to chase him down and make him earn it. Mike Janis, Steve Matusek, there are a handful of guys who have the opportunity to jump up and win this thing. I’m happy as heck to be one of them."

Coughlin's Charlotte win started there, when he beat Kevin Fiscus in the first round. The race was then postponed to Gateway, but Coughlin didn't slow down. He took out Donnie Walsh with a 5.845-second pass at 250.41 mph, beating Walsh's run of 5.905 seconds at 225.18 mph.

Coughlin's run also allowed him to snare the No. 1 qualifying spot for St. Louis. That's the second No. 1 of his Pro Mod career and first since Norwalk in 2012.

"It's exciting to get back on the other side of the fence, up on the pole there in front of everybody," Coughlin said. "We were able to pick up some points toward the latter part of the season, and we're going to make a run for the championship."

"We're not the fastest car out here," Coughlin said. "We're just trying to make good, competitive runs. Steve, Mike, Kyle and those guys are doing a fantastic job on this thing. They're giving us a race car that's been repeatable. We're not the fastest hot rod through all these laps, but it's the most consistent, and I know when I pull up to stage that they've given me a good hot rod. This Corvette is pretty mean.

"Thanks to the Powerrocks people, too. We'd like to thank them for sponsoring this race. We couldn't do it without the sponsors, that's for sure."