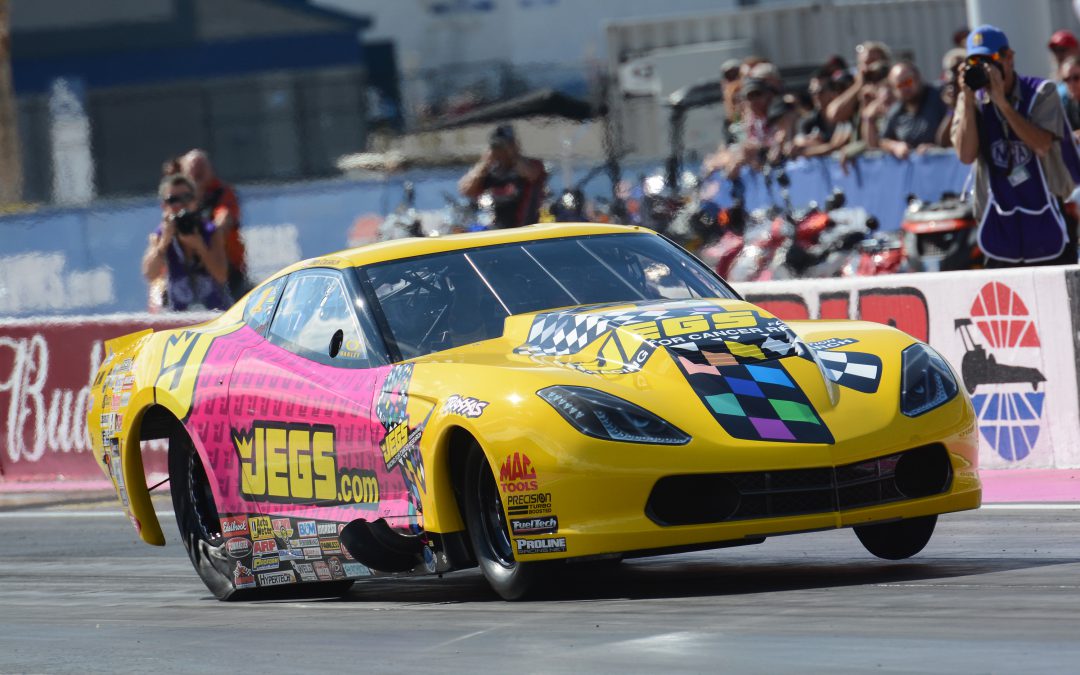 "It's been an awesome day and a phenomenal year," Coughlin said. "Last year we didn't win any races but managed to win the championship. This year we won three races but finished second. That's how crazy this class is and how close the racing has been year after year. It's a bunch of wins decided by fractions of a second.

"We've experienced a lot of emotion throughout the season. There's been a lot of ups and downs with some big rule changes but our guys adapted, came back hard and kicked ass, which made it very easy for me to drive this JEGS.com Corvette."

Coughlin flexed brute force on the quarter-mile strip all day, reeling off a stunning run of lightning-quick passes to beat Pete Farber, Kevin Rivenbark, newly-crowned champ Rickie Smith and Todd Tutterow in the final. This was Coughlin's third victory of the season and ninth of his Pro Mod career.

Although every round win was pivotal in the victory, it was Coughlin's second-round blast of 5.776 seconds at 252.76 mph that brought the crowd to its feet. His elapsed time was within striking distance of the national record of 5.751, and was easily the best of the entire race weekend.

"We're not touching this racecar because it's perfect," Coughlin said. "It might come out of the trailer again until (the 2017 season opener in) Gainesville. What a year it's been and what a way to finish it off. The whole Jegs.com<http://jegs.com/> race team has been strong and we couldn't be more excited.

"I want to thank the guys at Pro Line for building our engines as well as Alan Johnson and his crew out in California. I'm the lucky guy that gets to sit in the seat but it's the rest of these guys working their butts off that make it happen. I'm very proud of what Steve (Petty, crew chief) has done. I'm very proud of Mike Rees, Kyle Pettis and Woody Woodruff. It's so important to be associated with good people."

Seeing Smith clinch the title earlier in the day followed a familiar pattern for the two pros, who once worked together when Smith tuned Coughlin's car. In the last five years, Coughlin won championships in 2012 and 2015, while Smith won it all in 2013, 2014 and now 2016.

"Hat's off to Rickie," Coughlin said. "He's won more rounds than anyone else but we finished so close to him and made him earn it. What a deal. What a blast it's been. It's just been a great season and to win like this going into the off season is fantastic."