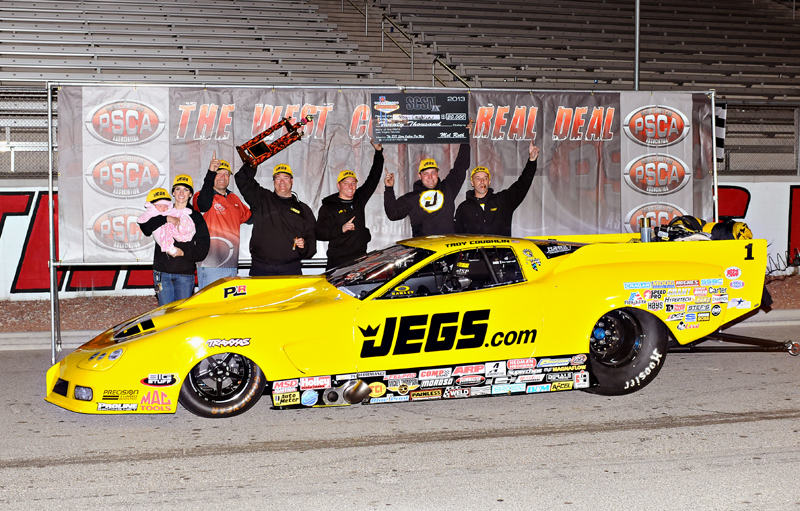 LAS VEGAS (Nov. 18) – At this rate of success, Troy Coughlin might not want to race anywhere but The Strip at Las Vegas Motor Speedway.

"We do seem to have the magic touch here," Coughlin said. "Beyond that, I've got a great team supporting me led by Steve Petty. They really get this car tuned to perfection when we're out here in the desert."

Coughlin, who qualified third in Outlaw Pro Mod, beat No. 1 qualifier John Stanley in the final. Stanley got off the finish line first, but it was Coughlin who had the better car. Coughlin's winning pass came in 5.914 seconds at 252.61 mph while Stanley slowed to a lap of 6.568 seconds at 184.12 mph.

"Last year we didn’t have a car next to us in the finals of this race because our opponent broke," Coughlin said. "I offered to split the pot with him then and he said, no way. So this year was a definitely a better challenge. The car ran well all day and really came through for us when it counted."

The semifinal round against Eric Dillard was Coughlin's closest contest of the afternoon. Dillard was off the line first, but once again the turbo JEGS Corvette muscled its way to the finish line first. Coughlin ended with a lap of 5.724 seconds at 259.11 mph to Dillard's 5.753-second pass at 259.31 mph.

"That round is what drag racing is all about," Coughlin said. "We were welded together all the way down the track. I knew he was right with me at the finish, and I was so happy when it was my win light that came on and not his."

Coughlin opened the day with a solid victory over European Pro Mod ace Adam Flamholc. Coughlin was off the line first and cruised to a pass of 5.715 seconds at 248.89 mph. Flamholc finished in 6.046 seconds at 237.30 mph.

In the second round, Coughlin advanced when Rob Moore was disqualified. Coughlin's time in that round was 6.484 seconds at 235.84 mph.

"This is always a fun weekend for us," Coughlin said. "Now we'll get back in the shop and start working on the car so we can start the season next year in Gainesville."