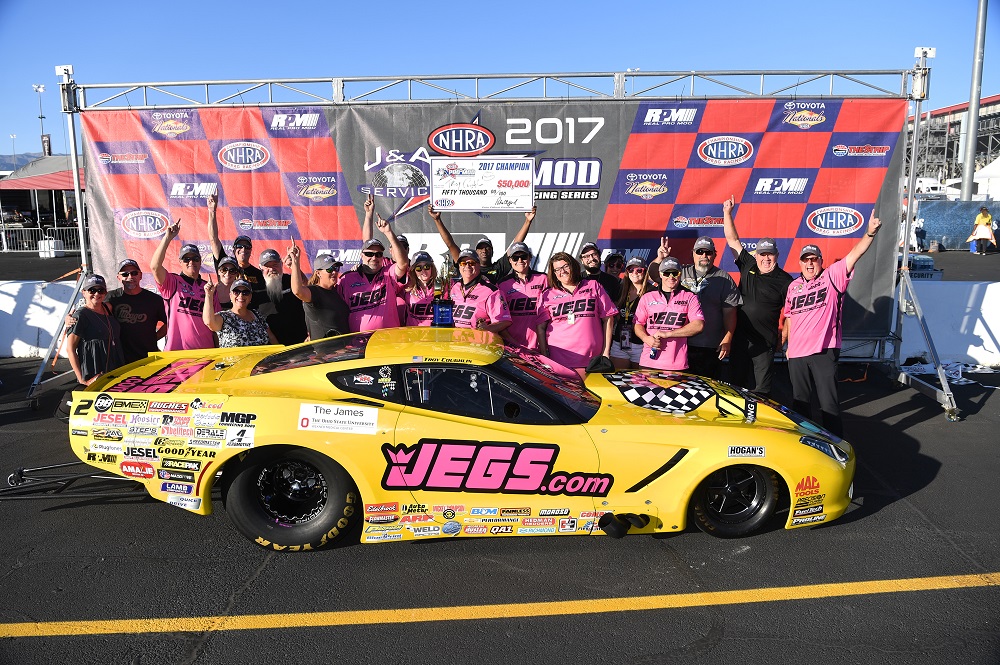 LAS VEGAS (Oct. 29) — Continuing one of the most incredible runs in drag racing, Troy Coughlin captured his third J&A Service Pro Mod Drag Racing Series title Sunday with a huge quarterfinal victory over championship rival Mike Castellana. Coughlin has now won the championship or come in second place in each of the last six seasons.

"It takes an absolute army of people to get to this point," Coughlin said. "From Steve Petty (crew chief), Mike Rees and Kyle Pettis, to my brothers and my wife and kids, to the 400-plus associates we have at JEGS Mail Order, on through to all of our incredible partners with the race team, we all did this together. Without any of those pieces in place, this wouldn't have happened.

"It was a struggle every race. We had some rule changes to deal with at the start of the year, then they threw some more at us late in the season, but somehow these guys kept focused and together with everyone at Proline and Fuel Tech, we figured out a way to win. This is such an exciting time for us. We've had an incredible run."

Coughlin's runner-up finish in this weekend's 17th annual NHRA Toyota Nationals was icing on the cake. The real goal was the championship, and although it took a little longer to get it done than expected, thanks to a change in the race day schedule, it was worth the wait.

After beating Sidnei Frigo Saturday night, Coughlin faced a second-round match-up with Castellana, the only driver left in the standings who had a chance to win the championship. Completing an incredible comeback that started five races ago, Coughlin beat the man who led the points for most of the year, running a 5.836 at 255.29 mph to Castellana's 5.837 at 249.07 mph.

"We were supposed to run Round 2 at 10 a.m. but they came to us and said they'd moved it back to 2 o'clock so we had some extra time to think about it," Coughlin said. "As the numbers indicate, it was a tough race. I had a bit of an advantage at the Tree but he edged ahead there for a bit before the turbos really kicked in and we were able to sneak by and win. What an incredible feeling.

"That's a great team over there and if not for some of the troubles they had down the stretch we wouldn't have caught them, but I guess the way it turned out we struggled earlier and came to life later and they did the opposite, although not by much. We have a lot of respect for that team and it means a lot to beat them."

After clinching the title, Coughlin and the JEGS.com Chevrolet Corvette C7 team pulled themselves together and prepared for the semifinals, where Coughlin beat Harry Hruska with a 5.843 at 254.04 mph to Hruska's 5.915 at 250.46 mph.

In the final, Coughlin faced Steve Jackson and gave up the win when his car suffered a mechanical issue and he was forced to abort the run.

"We're not sure what happened but since we have the entire off-season to worry about whatever went wrong there, we'll probably just throw her in the trailer and get ready for tonight's championship banquet," Coughlin said. "We have so much to be thankful for and I'm feeling very fortunate to be in this position once again. What a deal."