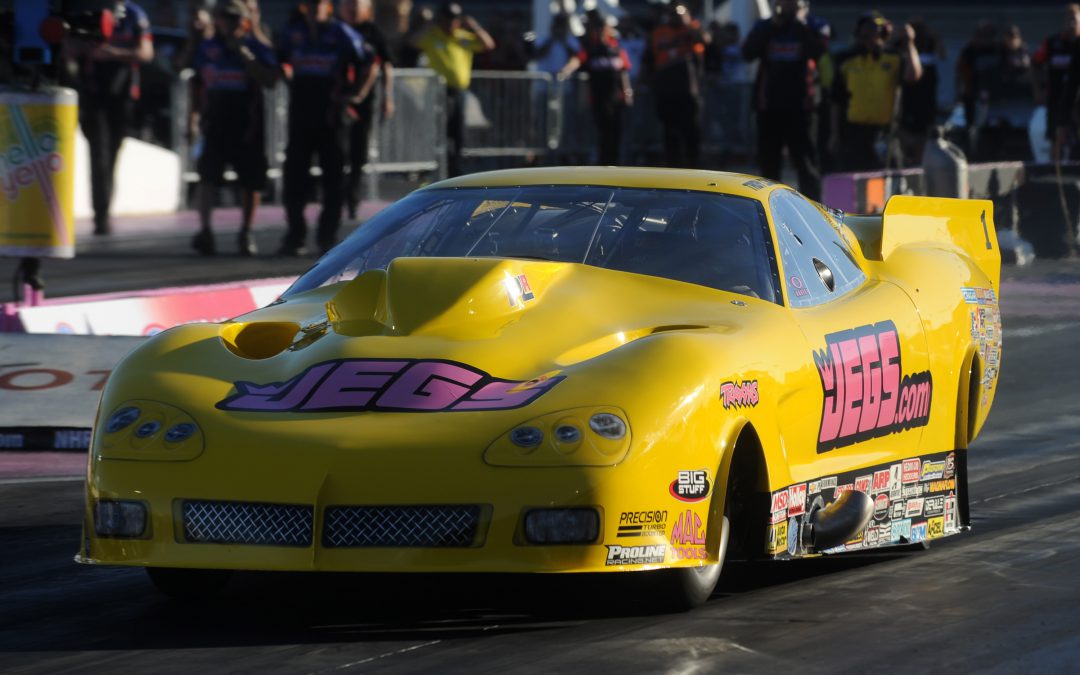 LAS VEGAS (Oct. 26) – Troy Coughlin's JEGS.com Pro Mod turbo Corvette has put a smile on the face of the 2012 champion at the NHRA national event on Saturday at The Strip at Las Vegas Motor Speedway.

Coughlin's Steve Petty-tuned Pro Mod was the fastest car on the property Saturday, with low elapsed time in the final qualifying session and then low ET of the first round of eliminations in beating Dan Stevenson.

"We've made two fantastic runs in the last qualifier and then in eliminations," Coughlin said. "We've got great momentum going into tomorrow. It's pretty exciting."

Coughlin, the No. 2 qualifier, has a chance to finish second in the Pro Mod points standings as the class closes out its season this weekend. Rickie Smith has already wrapped up the 2013 title, but Coughlin can vault from fifth with a good showing Sunday. He'll square off against No. 7 qualifier Dennis Radford in the second round Sunday morning.

"We can move up to second or third, for sure," Coughlin said. "We're looking pretty good."

Coughlin came into Vegas trailing second-place Mike Castellana by 24 points, third-place Von Smith by 20 points and fourth-place Mike Janis by 19. Smith lost in the first round, helping Coughlin pick up one spot.

"We came in and were running pretty decent to the pack," Coughlin said. "The guys just kept working on the car, fixing this and fixing that, tuning this and tuning that, and we were picking up. We picked up each round and making some good headway. We're trying to finish up a little higher in the points."

"That was a pretty exciting round win for us," Coughlin said. "We were low for the round and making some good runs."

The passes also were a confidence builder for Coughlin and his race team.

"It's a whole team booster, for sure," Coughlin said. "It keeps building you up a little bit, and it builds morale. You want to try and do better and take it a notch higher."

Coughlin would love nothing more than to score a victory in the season's final race.

"We'd get to fire the stogies back up," Coughlin said. "We'd get to be late for the banquet again. It'd be cool stuff. We'll take it, for sure."