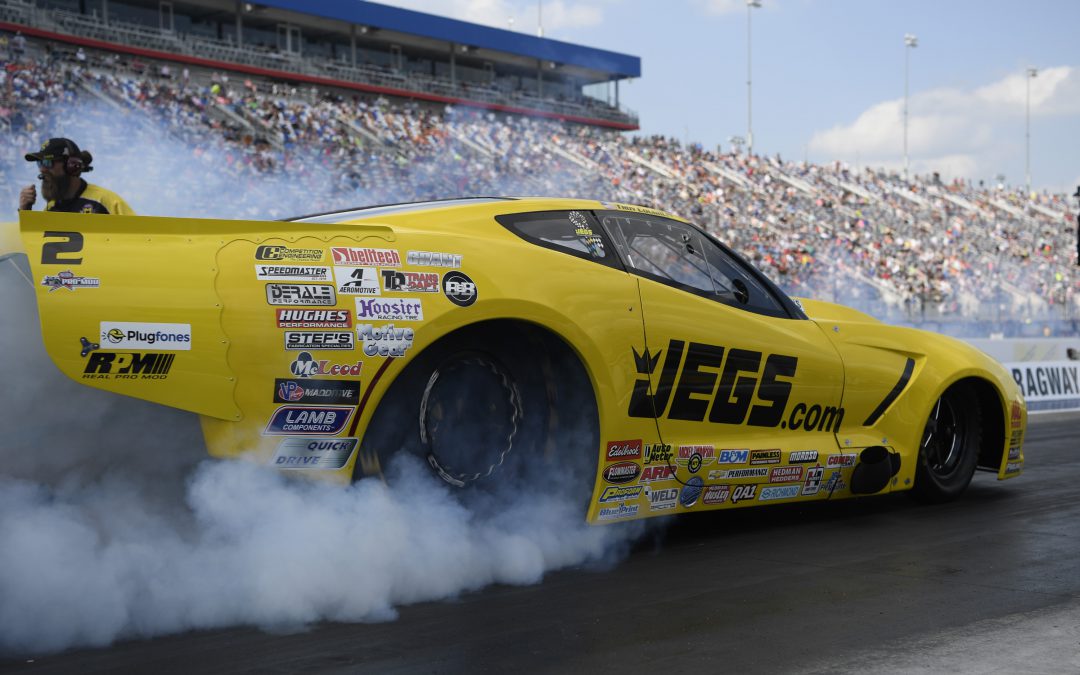 CONCORD, N.C. (April 28) — Aside from the obvious — that he posted the quickest elapsed time in the Pro Mod class Friday at the eighth annual NHRA Four-Wide Nationals — Troy Coughlin isn't quite sure how he ended up on top of the timing sheets at the midway point of professional qualifying, but he's not complaining one bit.

"We'll take it," Coughlin said. "I don't know how this happened because we ran almost the exact same numbers as we did in Houston last weekend under pretty similar weather conditions and all the supercharger guys that were way ahead of us in Texas have all dropped off quite a bit. It seems odd, but hey, we're No. 1 for now.

"It's exciting because this is the first four-wide race ever for the J&A Service Pro Mod Drag Racing Series and, at least for now, we're No. 1, so I'm happy for the guys and everyone back at JEGS in Ohio. It's a great day."

Racing his twin-turbo JEGS.com Chevrolet Corvette C7, Coughlin found himself in the No. 2 spot on the qualifying ladder after an opening-round pass of 5.834 at 253.04 mph. Things picked up considerably in the slightly cooler evening session and crew chief Steve Petty took full advantage of the conditions, posting a much improved 5.770 at 254.95 mph to earn Coughlin the top slot.

"The first run up there today there definitely were some jitters," Coughlin said, referring to his first-ever four-wide pass. "I was thinking, 'Hurry up and stage so you don't get counted out.' I was moving really quick through my prerace procedure to kind of learn a new rhythm for this type of racing. Ultimately, I had plenty of time but I wanted to be sure we didn't miss a pass.

"There's certainly a lot going on. You see all these cars pulling up behind each lane and there is twice as much noise and twice as many burnouts. It was a lot to take in, but it was really exciting at the same time. I was buzzing.

"The car's great. In Q1 it went nice and straight. It was a smooth run all the way around. I was actually surprised with a 5.83 because for whatever reason it felt like a 5.87, 5.88. We looked at the data from that run and Steve was able to pick it up for Q2."

Aside from his own team's success, Coughlin was proud of the entire Pro Mod class.

"For today being our first time four wide, I'm really happy to see how everyone performed," he said. "No one timed out, no one crashed or oiled down the track. I think we put on a great show and the fans let us know how much they appreciated it.

"On a personal note, it was great to see my brother Jeg lead the Pro Stock class. They had us both up to the media center, which was cool. Our brother Mike is No. 1 in Top Dragster over at the Indy divisional race and my son T.J. is doing great in Top Fuel. I'm a happy guy."