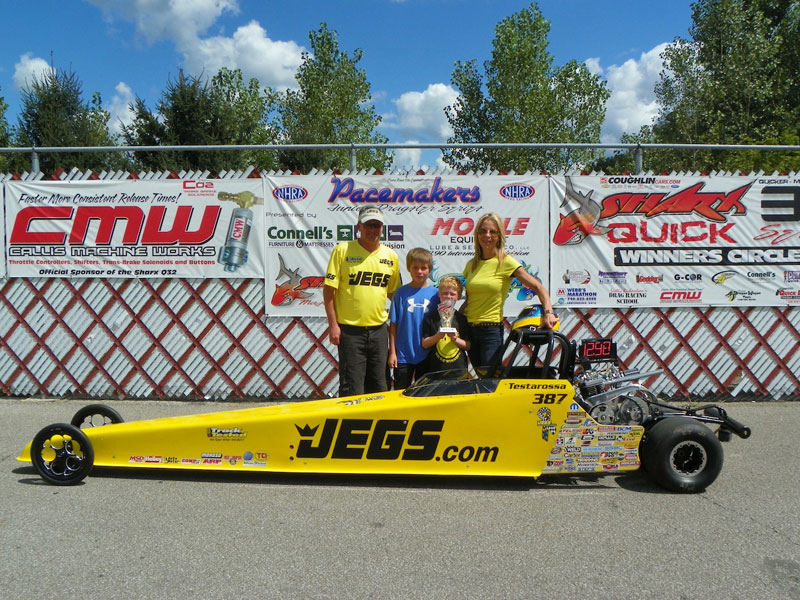 DELAWARE, Ohio (Sept. 12) — The successes of the third generation of Coughlin drag racers recently expanded to include Jack and Clay Coughlin, the sons of two-time champion Mike Coughlin and his wife Kriss. Jack, 11, and Clay, 8, both brought home hardware from Jr. Dragster events over the past two weekends in their native state of Ohio.

Driving a yellow and black JEGS.com Jr. Dragster built by American Race Cars with horsepower from Blossom Racing Engines, Jack survived four tough rounds to win the 11-year-old bracket at Kil-Kare Raceway. The victory earned Jack a ticket into a special race between all the winners from the various age groups, where he reached the semifinal round.

The win wasn't too big of a surprise as Jack raced his 8.90-second dragster to a runner-up result in his previous event.

Not to be left out of the hardware haul, Clay claimed the trophy for his age group in the 12.90-second category at Pacemakers Dragway Park.

"Clay's doing great," Mike said. "He's just getting started and, as crazy as it sounds, the 12.90 dragster is a lot harder to deal with than Jack's 8.90 dragster, but he's handling it like a pro. It was great to see him get a trophy as well.

"We have a lot of fun as a family, plus Greg Cody and Tom Stilwell come out and help us a bunch. I do the tuning but really it was Jim Daddus from American Race Cars that gave me the winning set-up."