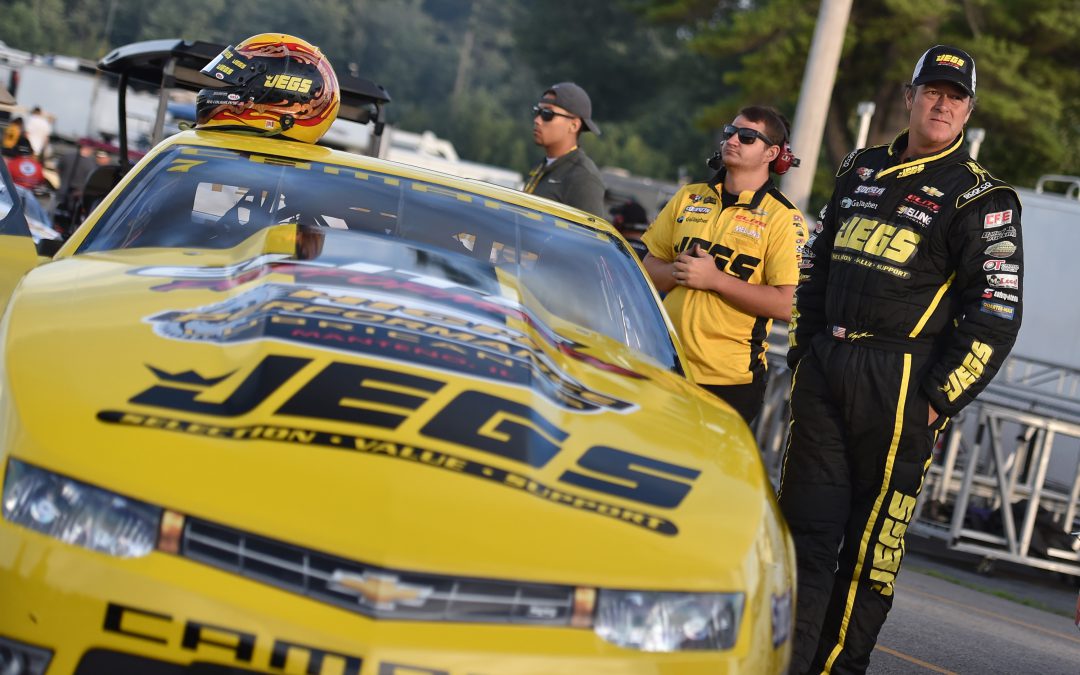 DENVER (July 17) — With two Pro Stock wins on the season and a pair of Pro Stock victories in the past at Bandimere Speedway, it seems appropriate that this weekend's 39th annual Dodge NHRA Mile-High Nationals will offer Jeg Coughlin Jr. two chances to earn a coveted Wally trophy.

Coughlin, a winner in Chicago and Bristol earlier this season and the Denver champ in 1998 and 1999, will be racing two cars on Thunder Mountain — his JEGS.com/Elite Performance Chevrolet Camaro in Pro Stock and his JEGS.com Dodge Challenger DragPak in Stock.

"There are a lot of good things going on right now," Coughlin said. "And racing two cars throughout the Western Swing is part of the excitement. Both cars are running great and I'm looking forward to busy times ahead.

"The Pro Stock car has been strong and really the entire Elite program has been extremely competitive. It's been a thrill ride, for sure, with an Elite driver in the final of nine races in a row. We're definitely making a statement. And even though I haven't driven the Dodge since 2015, a few friends of mine have raced it and it's been extremely fast and reliable. I like our chances in both cars."

Even though Coughlin and his Elite teammates Erica Enders, Vincent Nobile, Alex Laughlin and Matt Hartford have been racking up multiples of round wins every weekend, the team actually has been working overtime to make even more horsepower.

"Erica ran an experimental motor in New Hampshire and it ET'ed extremely well," Coughlin said. "The engine guys back in Wynnewood, Oklahoma, have been working over-time ever since preparing a couple more engines for us and we're definitely looking to implement some changes on the Western Swing.

"Denver is its own animal and we probably won't stray from the tried and true set-up we've been using at this race, but after that we'll be jumping into this new engine combination full force to position ourselves better for the Countdown. Erica's leading the points, which is great, but we're in seventh and that's a little bit uncomfortable. We need to win as many rounds as possible on the Swing to shore up our spot."

Coughlin pointed out that it's not unusual for top teams to try and stay ahead of the performance curve, even when they're running as well as the Elite team has this season.

"The championship contenders are all in the same boat," Coughlin said. "We're all trying to get the most out of the clutch and suspension while we search for more horsepower. No one gives an inch and that’s been pretty evident with the number of different winners we've had this year and the overall parity in the class.

"The 10 drivers that make the Countdown will have earned their spot and then we all reset and make that six-race run to the title. It's going to be a blast."