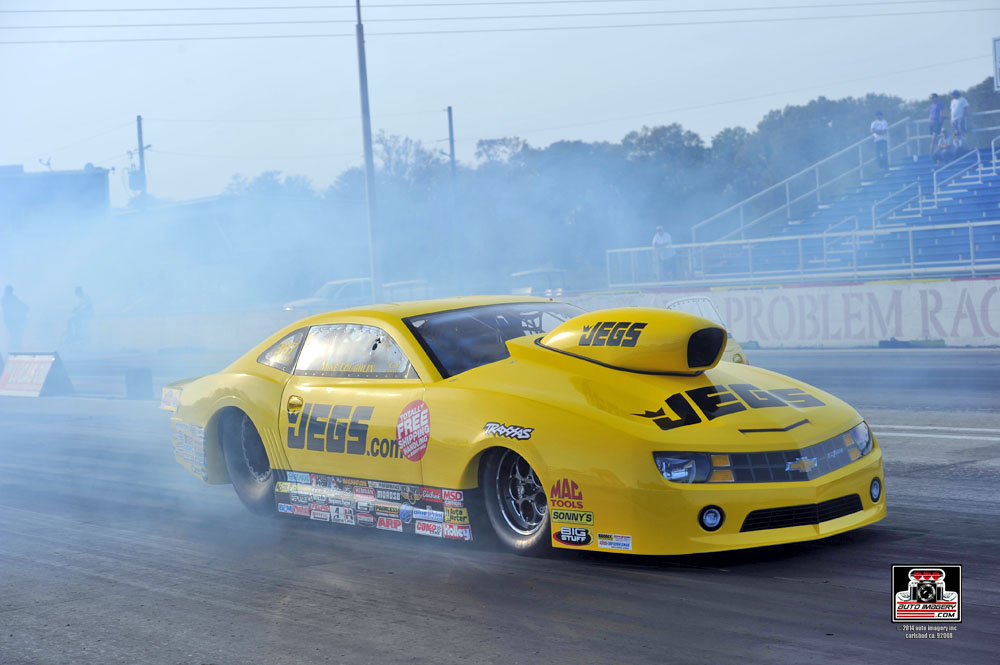 NORWALK, Ohio (May 14) — Top Sportsman racer Mike Coughlin begins his quest for a third Division 3 championship in earnest this weekend in his home state of Ohio. As always, Coughlin will be wheeling his yellow and black JEGS.com Chevrolet Camaro, proven as one of the quickest and fastest Top Sportsman cars in the country.

"I'm ready to go racing," said Coughlin, who skipped the first D3 race due to family obligations. "It's been a couple months since we race at the Cajun SPORTSnationals and I'm itching to get back in my racecar and compete.

"It should be a good weekend for us. I really enjoy going to Norwalk. It's a great track and close to home so we get great support. Greg (Cody, crew chief), Tony Collier and Rick Rossiter worked on some things last Friday when we went up there for a test-n-tune session and he chased away some electrical gremlins that were popping up from time to time so we're very confident in the car and what we can achieve this time through."

Although Coughlin hasn't been racing himself, he's still spending plenty of time at the drag strip as his youngest son Clay works to defend his 2013 Jr. Dragster title from their home track of National Trail Raceway in Hebron, Ohio.

"Clay's doing great and Jack's raced a few times himself," Mike said. "I'll tell you, the Jr. Dragster class is so much fun and we enjoy those weekends a bunch. It's just a great family atmosphere and the kids have a blast, win or lose.

"This weekend coming up the roles will be reversed a little as Clay will be with me to help on my car. It brings back a flood of memories of me and my brothers working on Dad's (Jeg Coughlin Sr.) car back in the day."

Mike, the 2007 and 2009 Top Sportsman champion in Division 3, will now focus on going rounds in Norwalk as he begins to accumulate points towards this year's title chase.

"We've pretty much got a clean slate in front of us so we need to do all we can to get out of the starting blocks with a good run in Norwalk," Mike said. "That would set a nice tone for the rest of the year. We don't race as many events as I did in the past so we need to capitalize on the ones we do attend."

Time trials begin at 10 a.m., Friday, with the first round of Top Sportsman qualifying slated for 4:30 p.m. Two more rounds of qualifying are scheduled for 2 and 7 p.m., Saturday, with eliminations starting at 10:30 a.m., Sunday.