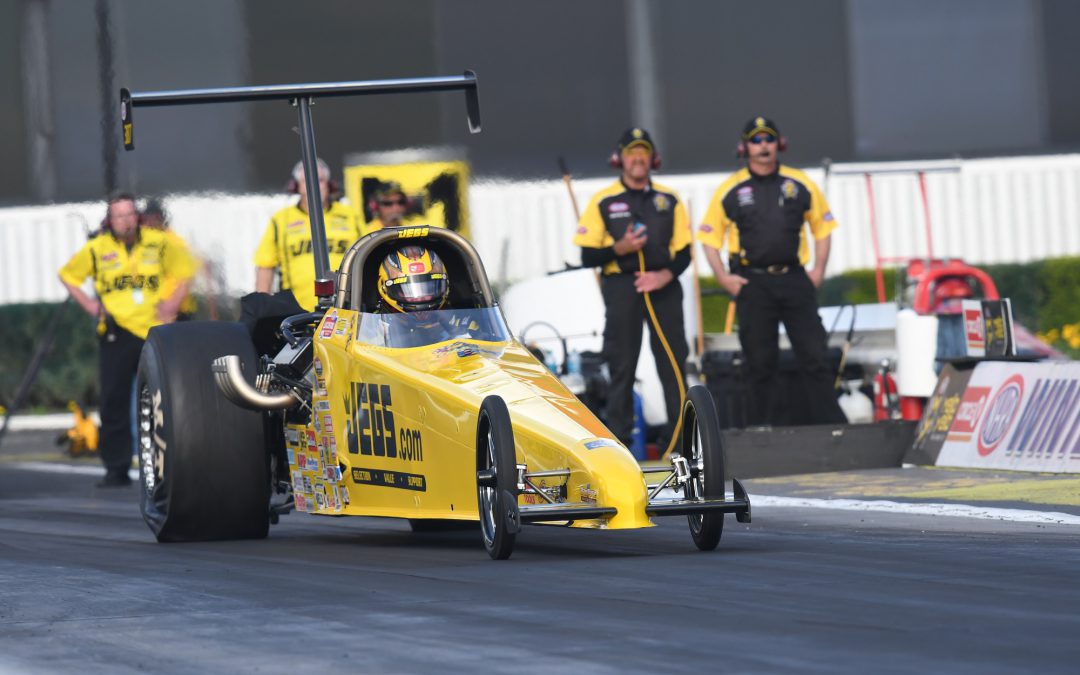 NORWALK, Ohio (June 20) — Mike Coughlin is a slight fellow, no more than 160 pounds soaking wet, but that doesn't mean he doesn't get a hankering for "seconds" every once in a while. The two-time Division 3 champ will be looking for drag racing "seconds" this weekend in Norwalk, hoping for both his second win at the facility and his second national event victory of 2017.

"The JEGS.com Top Dragster has been running great all year, ever since we won the season-opener in Pomona (Calif.) so there really hasn't been a need to change anything," Coughlin said. "We're looking to continue our consistency and maybe just get a few more round wins and end Sunday in the winner's circle.

"We won Norwalk in our Top Sportsman car in 2014 and that was a really great memory because my brother Troy won Pro Mod the same day so we have a crowded winner's circle there. Maybe we can do that again and add Jeg (brother, who races Pro Stock) and T.J. (nephew Troy Jr., who runs Top Fuel) into the mix."

A big day for the JEGS race team would be perfect for Coughlin for a number of reasons, mainly due to the huge support they get racing so close to home. Coughlin and family live 90 miles south of the track in Delaware, Ohio, and JEGS Mail Order headquarters is very close to his home.

"I know a bunch of JEGS associates are coming up and of course lots of family and friends will be there," Coughlin said. "We always have a good time in Norwalk. I have a lot of respect for the Bader family. I think they do the best job of any track owners in the country of promoting and running a drag race of this scale. I'm honored to know them and call them friends.

"I'm also really excited about T.J.'s aluminum can drive. He came up with this concept of having teams and fans deposit used aluminum cans in marked receptacles all around the track with all the proceeds raised by the recycling going to a children's burn center. I'm really impressed with T.J. and his idea. I'll do all I can with our group to help out."

As always, Coughlin heaped praise on his crew, which consists of Greg Cody, Ryan Micke, Dave Ruark and Tony Collier.

"The guys are doing such a great job of preparing the dragster every weekend and every run," he said. "It's staying together, not breaking any parts, and we're going rounds every race. Hopefully a second win is coming this weekend with our second win in Norwalk. That would be perfect."