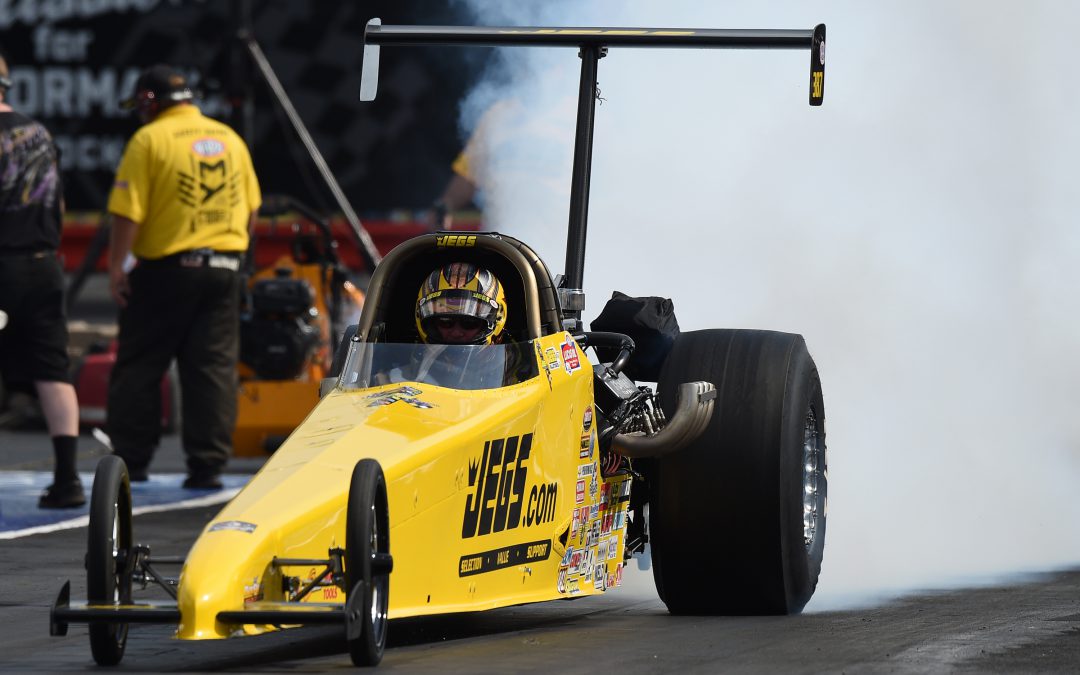 NORWALK, Ohio (June 25) — Although he didn't match his winning effort from 2014 at this track, Top Dragster driver Mike Coughlin represented his decorated racing family well Sunday by reaching the third of five rounds in his competitive eliminator class

Coughlin, the 2007 and 2009 D3 Top Sportsman champ, was anxious to add a Top Dragster trophy from Norwalk to the Top Sportsman one he captured here three years ago, but he ultimately fell a little short. Nevertheless, he was pleased with the performance of his JEGS.com dragster and the work put in by his crew.

"This class is so tough and that makes it exciting, especially as the rounds tick by," said Coughlin, who won the season-opening Winternationals in February in Pomona, Calif. "My guys — Tony Collier, Ryan Micke andGreg Cody continue to give me a perfect car every round of every race and I'm having a blast.

"You always want to win, especially when your family is at the track and all our friends and JEGS associates from back home in Delaware (Ohio) made the drive up here, but we're still pretty satisfied to go three rounds. It all adds up in the end. Big thanks to my wife Kriss, our boys Jack and Clay, my dad (Jeg Coughlin Sr.), my brothers Jeg, Troy and John, who was keeping up online, and all the nieces and nephews here cheering for us."

After beating Lauren Freer Saturday evening, Coughlin opened Sunday's racing by surviving a double-breakout affair with Marco Abruzzi. Running on a 6.02 dial-in, Coughlin sped to a 5.996 at 226.73 mph, but advanced when Abruzzi busted his 6.33-second dial-in by -.036 seconds, posting a losing 6.294 at 214.25 mph.

"The weather was changing throughout the day and just got a little slower than we thought," Coughlin said. "We kind of missed the set up that round by a good bit. Maybe we were at the wrong place at the wrong time. Everything was working good, we just missed the dial.

"When I figured out I wasn't going to catch him, I did lift trying to run him out but it didn't work. He was ready for me. That's drag racing."

Up next for Coughlin is the Double-Header Weekend presented by Aeromotive Fuel Systems, July 27-30, at Heartland Park Topeka in Kansas.