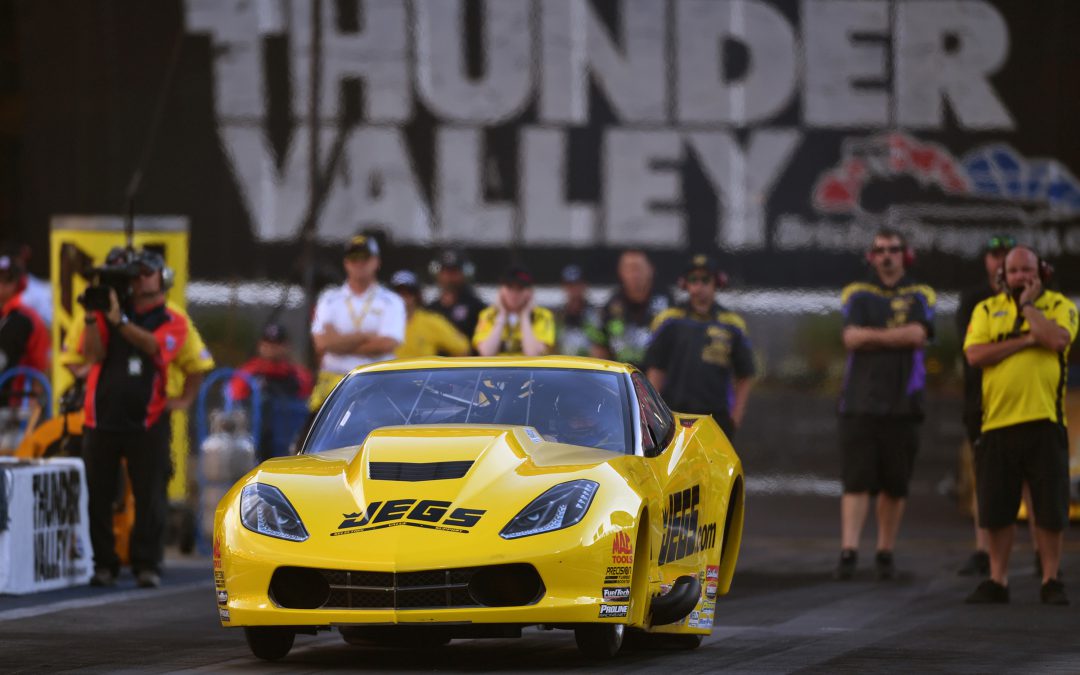 BRISTOL, Tenn. (June 17) — After running his best pass of the event to qualify second in the J&A Service Pro Mod Drag Racing Series, two-time Pro Mod world champion Troy Coughlin managed to get even quicker in defeating Mike Janis in the opening round of eliminations at the 17th annual NHRA Thunder Valley Nationals.

"I'll tell you, the JEGS.com team has done a helluva job of keeping this thing going great and I'm excited for second round," Coughlin said. "I think getting to the final round last weekend in Englishtown and coming away as runner-up really motivated everyone to be absolutely on their game here in Bristol."

Coughlin was actually the provisional top qualifier after posting a class-leading 5.854 at 254.33 mph Friday evening, and even though he improved to a 5.846 at 255.58 mph in Saturday's third and final round of time trials, he was passed on the starting grid by Shane Molinari's 5.837 at 256.70 mph.

Nevertheless, the team was unfazed, with Coughlin executing a convincing victory over Round 1 opponent Mike Janis, who failed to complete his run and drifted through the finish line timers in 7.884 seconds at 122.87 mph. At the same time, Coughlin lowered his best elapsed time of the weekend with a 5.842 at 254.86 mph in his twin-turbo JEGS.com Chevrolet Corvette C7.

"Consistency is very important in this sport and (crew chief) Steve Petty has this thing as consistent as maybe it's ever been," Coughlin said. "In the four runs here we've gone 5.88, 5.85, 5.84 and 5.84 and had the quickest car in three of the four rounds, I believe, so obviously we have a quick and consistent car."

Looking ahead, Coughlin will face No. 10 qualifier Bob Rahaim in the quarterfinals. Rahaim upset seventh-ranked Mike Biehle with a 5.855 at 246.98 mph in the opening session. Coughlin will enjoy the advantage of lane choice.

Should Coughlin beat Rahaim, he will move into second place in the championship points standings due to the fact Steven Whiteley lost to Rickie Smith in Round 1. The two men directly behind Coughlin in the world rankings, Steve Jackson and Steve Matusek, also were upset in Round 1.

"Tomorrow's going to be an awesome day," Coughlin said. "Father's Day is big for the Coughlins and having my son T.J. (Troy Jr.) racing in Top Fuel this year has been a thrill. If he were able to pull off a win tomorrow, I couldn't imagine being more excited.

"It would also really be something for me and Jeg (Coughlin Jr., brother racing in Pro Stock) to bring a trophy home to dad. He's heading back from Ireland tomorrow. I thought there might be a chance they were stopping here but they are heading straight back to Ohio instead so we will have to celebrate Sunday night when we get home if any of us are lucky enough to win. It's fun to think of the possibilities."