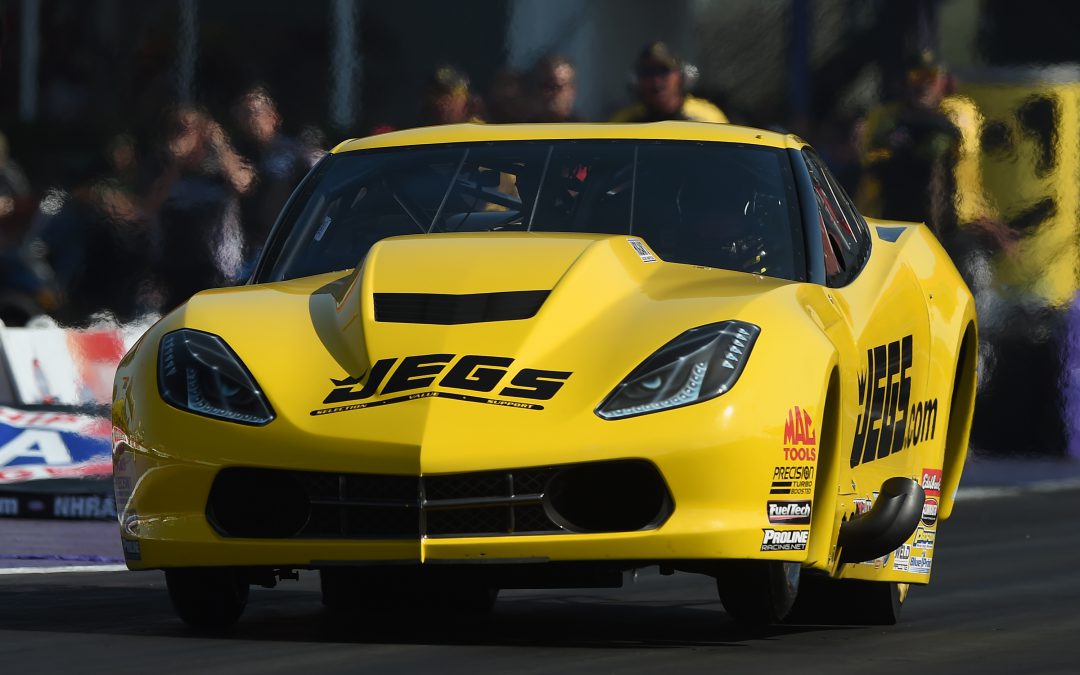 "I'll tell you what; Steve Petty, Mike Rees and Kyle Pettis are doing a great job on this racecar," Coughlin said. "We're trying some things to get us on the fast side of the fence because the supercharged and nitrous cars are so fast right now. They've been given some big advantages with weight reductions and another five to six percent more horsepower the NHRA gave them over the winter.

"We're digging deep. We have to try and stay close to those guys. For sure, we're going to fight to the end every round and every race. I'm seriously proud of our JEGS.com team for getting this thing to the second round. At this point in time we've made some pretty solid runs, including that one just now, so we're pretty excited about that."

Coughlin qualified his JEGS.com C7 Corvette in the No. 7 position with a best pass of 5.820 at 253.90 mph. The run came Friday evening without direct sunlight on the racing surface. Conditions were even better in Round 1 when he beat alBalooshi an hour or so after a cooling trend arrived in the Houston area.

"We've raced in these conditions before and I know Steve likes it cooler so he can take these Pro Line engines and get them tuned up," Coughlin said. "They're fast, without a doubt, and they run better when it's a little cooler. We're going to have a fast hot rod tomorrow in the cooler temperatures, for sure. We'll be ready!"

Just before Coughlin's run, as he waited in the water box, he witnessed a big crash by Bob Rahaim that saw the veteran racer get airborne and ultimately hit both walls. But Coughlin was unfazed by the incident, which thankfully ended with Rahaim climbing from the wreckage under his own power.

"First, you say 'ouch,' then you just pray he's okay," Coughlin said. "In your heart (racing) is a passion you have, and you know (accidents) are part of it. We've just been extremely lucky and very fortunate with good pieces and good people working on these things to keep them shiny side up throughout my career.

"You can't let it unnerve you. I did see on the big screen TV when Bob got out of the car, took his helmet off, and gave everyone a thumbs-up. It was a relief. I know he took a couple of hard hits but he bounced back and got out on his own. I just went over to see him and he was on the phone with family. He's okay. Thank the good Lord."