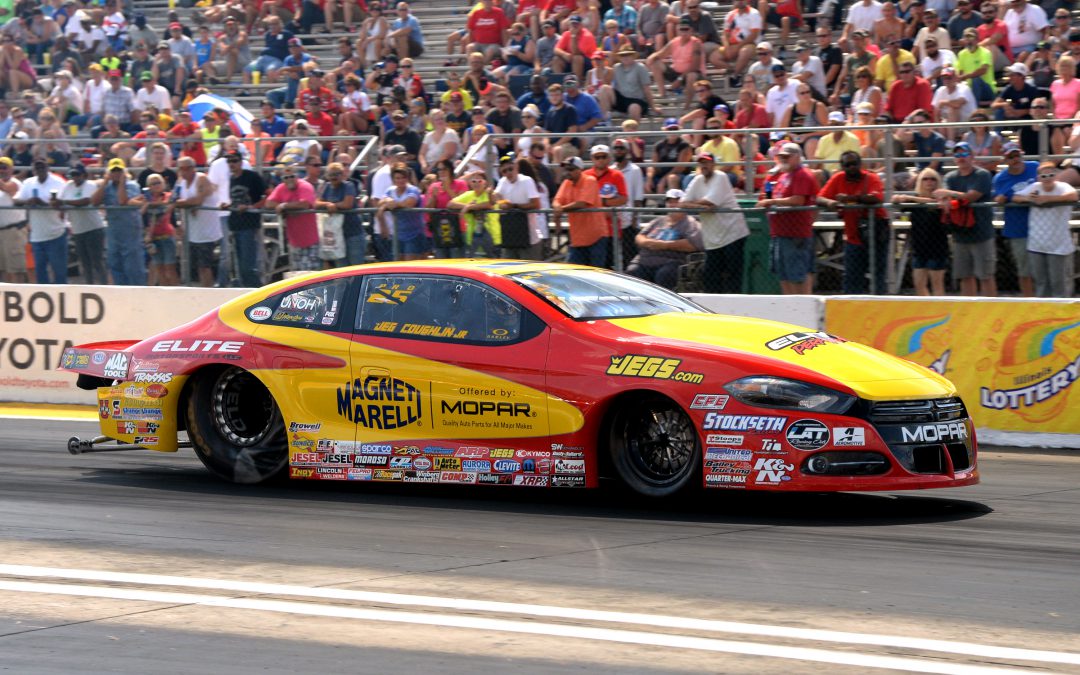 Coughlin fell to Chris McGaha in a winnable first-round race Sunday with the Magneti Marelli offered by Mopar/JEGS.com Dodge Dart. Neither driver was very good on the Christmas Tree, but McGaha was a tick better on the racetrack: 6.632 seconds at 208.46 mph to 6.667 at 206.70 mph. Those passes came after McGaha had a .054-second reaction time, edging Coughlin's .065 light.

"We had some confidence coming into today, probably more than we've had the last couple of races quite honestly," Coughlin said. "We just went out and didn't perform very well personally. We had tons of room on the Tree — after the fact, you know. If I could have been .018 or better, we could have won that round.

"I was .012 and .017 in my qualifying runs and felt great behind the wheel. I just let the clutch out and felt like I was .030 and rolled down through there and saw Chris pulling on us. That was a bummer without question."

Coughlin, the No. 10 qualifier, had made some gains this weekend but still trails the top cars in the Pro Stock class.

"Obviously we know we need to get the jump to be able to turn on the win light on Sunday, at least 9.9 out of 10 times," Coughlin said. "I just wasn't able to pull it off. The car ran pretty decent, went .66, and we were pretty aggressive in the setup again. We felt like it would be a little freer and accelerate a little better and didn't get that done."

Coughlin, ninth in the Countdown to the Championship, races at the Dodge NHRA Nationals next weekend at Maple Grove Raceway in Reading, Pa.

"We move on to a race that's near and dear in our hearts, Reading," Coughlin said. "I look forward to getting there, it's a fun race."