Ultimate success in Seattle eludes Mike Coughlin and Jeg Coughlin Jr., but gains were made 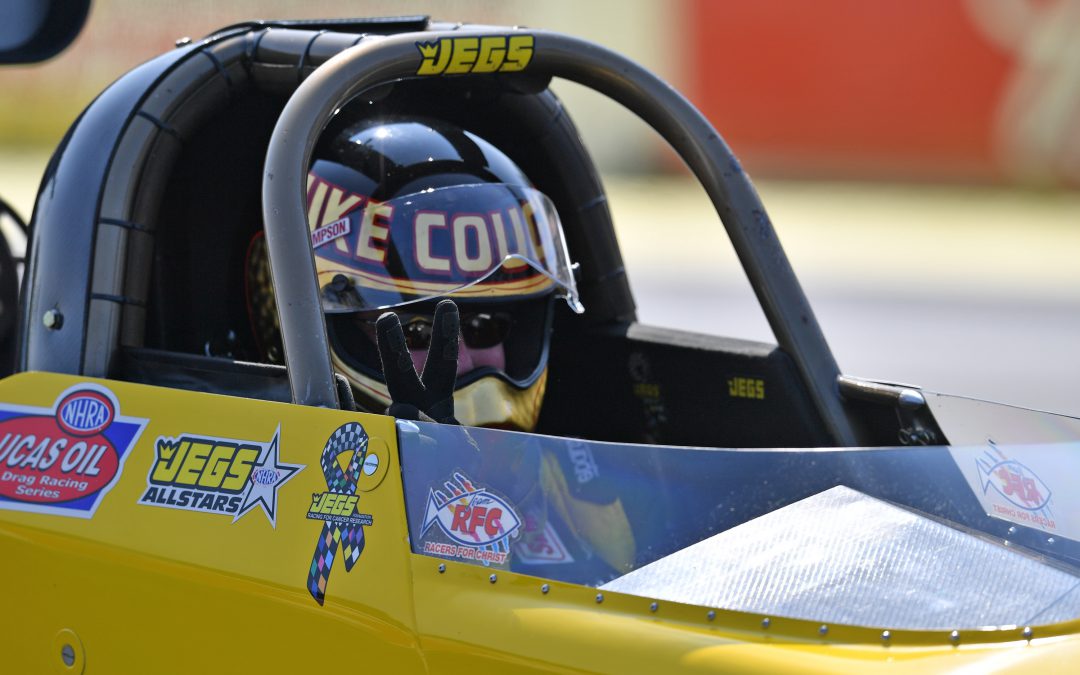 SEATTLE (Aug. 4) — Drag racing brothers Jeg Coughlin Jr. and Mike Coughlin concluded their visit to the West Coast with solid results at Sunday's 32nd annual Magic Dry NHRA Nationals. Mike progressed to the third round in his JEGS.com Top Dragster before losing a close race by just a few inches, while Jeg Jr. reached the quarterfinal round of Pro Stock in his JEGS.com Elite Motorsports Chevrolet Camaro.

"I know we both wanted more but like I tell my son all the time when he's playing golf, 'Once a shot has happened, good or bad, the only thing you can do is move on to the next one,'" Mike said. "So, I'll take my own advice and move on from this race and get set for the next one.

"We came out west to gain some national points here and in Sonoma and we did just that. Sure, you always want more, but considering how our race went here, we'll count ourselves as lucky and take what we got."

Mike's luck came in the form of a fortuitous gap in the race schedule that allowed him and his crew — Greg Cody, Tony Collier and Dave Raurk — to swap engines after his first-round bye-run, which they had earned by qualifying No. 1 at the event.

"We broke something in Round 1 and decided to change motors but we basically had all day Saturday to get the job done," Mike said. "We didn't have to rush, which allowed us to make sure everything was done correctly. The only deal with swapping motors is it's a bit of a guess when it comes to figuring out the dial-in. We settled on 6.22 and went out there and won Round 2 (by beating Kevin Chambers) with a 6.301 at 212.90 mph.

"After that we bumped it up to 6.25 and ran a 6.256 at 196.44 mph against Thomas Bayer in Round 3, but I goofed up at the finish line and gave it away by a few inches. I thought I was ahead but he had just passed me by .0021 seconds. Just one of those super-close, great drag races. Like I said, we'll take it, all things considered."

By qualifying on the Pro Stock pole for the 30th time in his career, Jeg Jr. started his race day opposite Alan Prusiensky, the 16th and final qualifier. Knowing he needed a big break to earn the win, Prusiensky took a shot at the Christmas Tree but ended up fouling out by -.232 seconds. Jeg Jr. still drove-out the race and posted a 6.577 at 209.95 mph, more than enough to beat Prusiensky's meaningless 6.716 at 207.59 mph.

"We were pretty conservative in Round 1 and when we got after it a bit more against Matt the track didn't like it," Jeg Jr. said. "We lost traction very early in the run and then it shook the tires hard at that point and we were pretty much done. I did run it out because after that pedaling contest I had with my teammate Alex Laughlin in Norwalk I realized that even after 20-plus year of Pro Stock racing I still have some things to learn, but barring anything crazy happening I wasn't going to catch Matt.

"We still leave here with our heads held high and we'll get to work on racing in Brainerd (Minn.) in a few weeks. I will be entering another SFG $50,000-to-win bracket race in West Salem, Ohio, next weekend to stay sharp and have some fun and then we'll focus 100-percent on Brainerd."