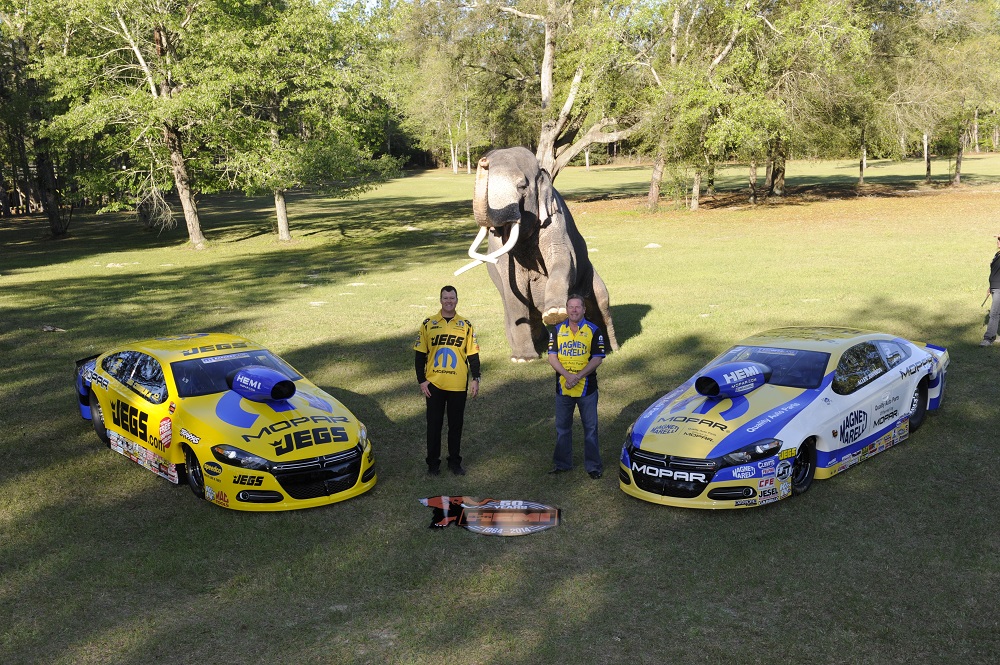 Luke, a 12,000-pound elephant from the ranch, joined Coughlin, J&J Racing teammate Allen Johnson and Mopar President/CEO Pietro Gorlier to introduce the Dart to assembled media as part of the 50th anniversary of the Dodge 426 Hemi.

"To see it all come to light today was amazing," Coughlin said. "The Hemi's always been the big elephant in the room, and I've been fortunate to drive several Hemi’s in my career.

"As the years have gone by, technology has increased, but the passion at Mopar, Chrysler and Dodge remains the same. That passion went into this new car, and to unveil it today with a live elephant, who would have ever thought it? Very special, and I'm very proud to be a part of it all."

The new Dart will make its racing debut in the Amalie Motor Oil NHRA Gatornationals this weekend at Auto-Plus Raceway at Gainesville.

"I couldn't be more excited to debut the new Dodge Dart here in Gainesville," Coughlin said. "But what's really exciting to see all the heart, soul, passion and drive that's been put onto this project over the last 15 months from all the engineers at SRT Engineering and everyone at Mopar.

"To see it come to light, to actually be able to strap myself into it and go down the quarter-mile on my very first run and run over 200 mph, the debut is going to be phenomenal."

Work began on the new car more than a year ago, with the SRT group at Chrysler Technology Center working with J&J Racing and Jerry Haas Race Cars. Coughlin made his first run in the car recently, with extensive testing in Bradenton, Fla., earlier this week.

"Testing the new Dodge Dart was amazing," Coughlin said. "I couldn't have been more happy with the year of preparation that it took to get the car onto the race track, from the SRT engineers to all the folks at CTC that were working on the chassis designs with Jerry Haas to Mark Ingersoll and the entire J&J team."

On his first test run, Coughlin was supposed to only go through second or third gear before clicking the car off. But he continued well past that mark.

"It felt so good," Coughlin said. "Straight as a string, and I banged all five gears and drove it nearly to the finish line. I thought, 'Oh, shoot, I've got to let off this son of a gun,' because everything is brand new: New brakes, new parachutes, everything.

"It felt fantastic. My second run, I went over 211 mph, which was very competitive. That's the type of effort that our teams have put into this. Now, it's show time, it's game time."