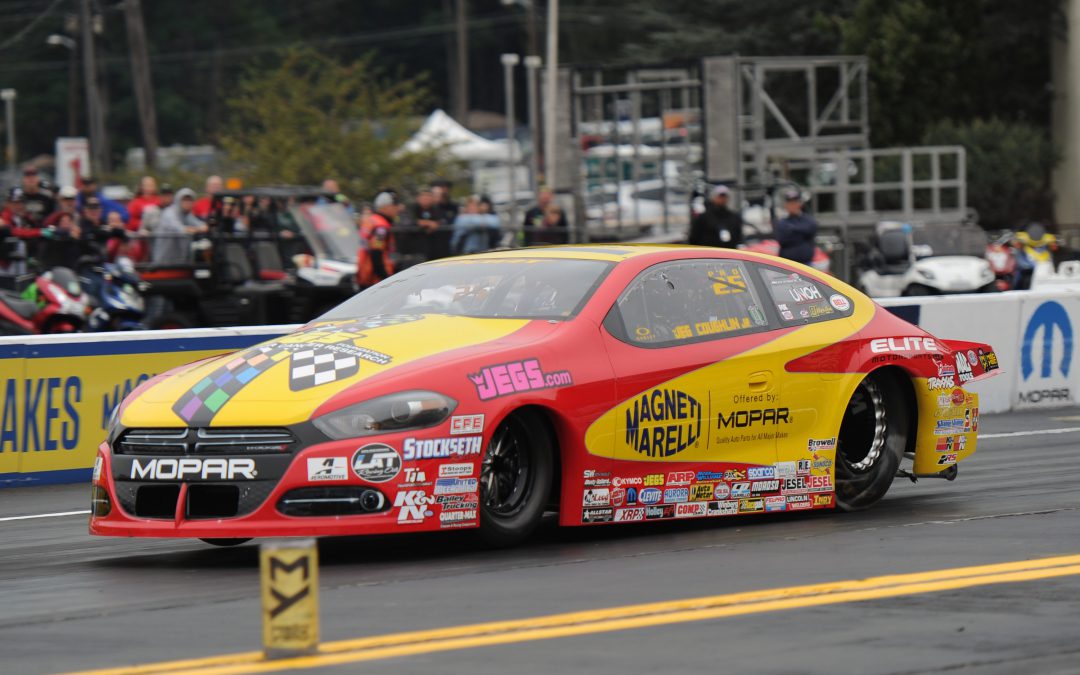 READING, Pa. (Oct. 1) — With rain erasing three of the four scheduled qualifying sessions at this weekend's 32nd annual Dodge NHRA Nationals, the one pass drivers got down Maple Grove Raceway was literally a make-or-break run. Fortunately for five-time Pro Stock champion Jeg Coughlin Jr., he made it into the elimination field, but it took every bit of his 377 national events worth of experience to get the job done.

"I almost went over," Coughlin said of his pass down a very green racing surface. "Obviously all the teams are battling same conditions and we were lucky to even get one run in, most likely, but that was a wild one for us.

"The cooler conditions made the track so good on the launch pad and we just weren't aggressive enough so when I dropped the clutch it dead-hooked and I went hard left. I was going through the gears and trying to navigate back into the groove but when I got past fourth gear it started spinning the tires and the rear end wanted to come around on me. I had to shove in the clutch to let it straighten out. There was no choice."

The aborted run resulted in Coughlin drifting through the top-end timers in 7.147 seconds at 153.60 mph, which placed his Magneti Marelli offered by Mopar/JEGS.com Dodge Dart in 14th place overall.

"It wasn't a record time but we kept it between the guardrails and off the centerline, so we didn't DQ ourselves, which allowed us to take one of the bottom-half spots on the ladder," Coughlin said. "As I said earlier, with the mist we had hanging over the track all day, we're lucky we even got one run so we'll take this and move on to tomorrow."

Coughlin will take on a familiar foe in Round 1 of eliminations when he lines up against Greg Anderson, who powered to a 6.580 at 210.77 mph. Anderson is a seven-time winner this year, and like Coughlin, a multi-time world champion.

"We know those guys well," Coughlin said. "And vice versa. It should be a good race, certainly better than our qualifying number would indicate. It's special circumstances this weekend, without a doubt.

"They've got three cars over there, just like we have three cars on this team, so we're all going to have some pretty good data to go through and figure out how to attack this thing. The schedule has been rearranged and they are running a bunch of sportsman cars, all the alcohol cars, plus the nitro cars before we run so the track should be the best it's been. I'm looking forward to having some fun."