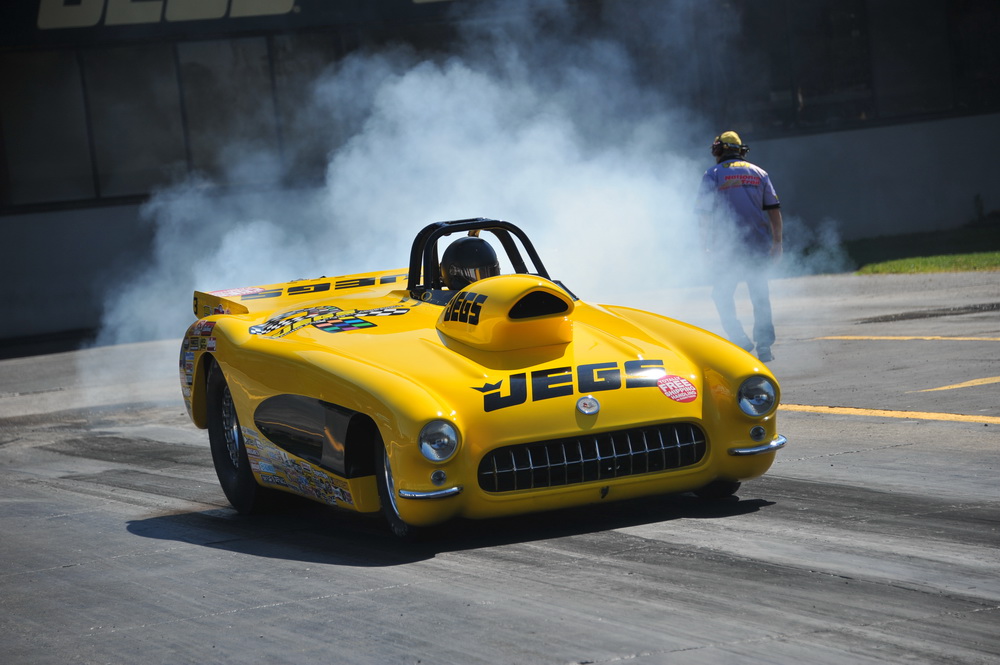 With victories at the prestigious Mac Tools U.S. Nationals, the JEGS Northern SPORTSnationals and a Division 1 race in Cecil County Dragway in Maryland — plus a runner-up result in Bowling Green, Ky. — Coughlin has been nearly perfect in his JEGS.com Super Gas Corvette over the last six weeks. He'd love nothing more than to stay on his winning roll under the famous Gateway Arch.

"We're having a lot of fun, no doubt about it," Coughlin said. "I'm the luckiest guy in the world to have this opportunity. It starts with my parents, then my uncles who allow me to race for JEGS, on to my incredible crew of Greg Cody, Tony Collier, Justin Beaver and Rick Rossiter. These are the people that have made this happen. I'm just the lucky kid that gets to drive the racecar.

"The preventative maintenance the guys have laid out has been the difference. The parts we use are very high quality thanks to the track-tested vendors program but the constant load of 1,100 horsepower is a lot. Fortunately, the guys keep such a meticulous watch on every single component to prevent any problems that we've had very little parts failure, which is usually what makes or breaks racers at this level."

While his Super Gas car is running so well that Coughlin's six-time world champion uncle Jeg Coughlin Jr. admits to being a tad jealous, T.J., as he's widely known, will also compete in a JEGS.com Super Comp dragster. Although he hasn't found as much success with the dragster, T.J. says competing in both categories helps his overall program.

"The more seat time you get, the better you're going to be," T.J. said. "The more times you can hit the tree and run down the strip on a given weekend, the better your focus is going to be. With the guys taking such good care of both cars, I've been able to concentrate all of my energy into driving the cars and it's helped a bunch.

"Still, we have to remember that just because we've had a good run lately, that assures us of nothing when we get to St. Louis. We have to be tenacious in getting a grip on the track, on reading the weather conditions and on understanding what tune-up will work best. We'll be ready to go on all fronts."

T.J. will be joined in St. Louis by his uncle Jeg, who is the defending world champion in Pro Stock, and his father Troy Coughlin, the 2012 Pro mod world champion.

Sportsman qualifying in all categories begins at 8:30 a.m., Friday.