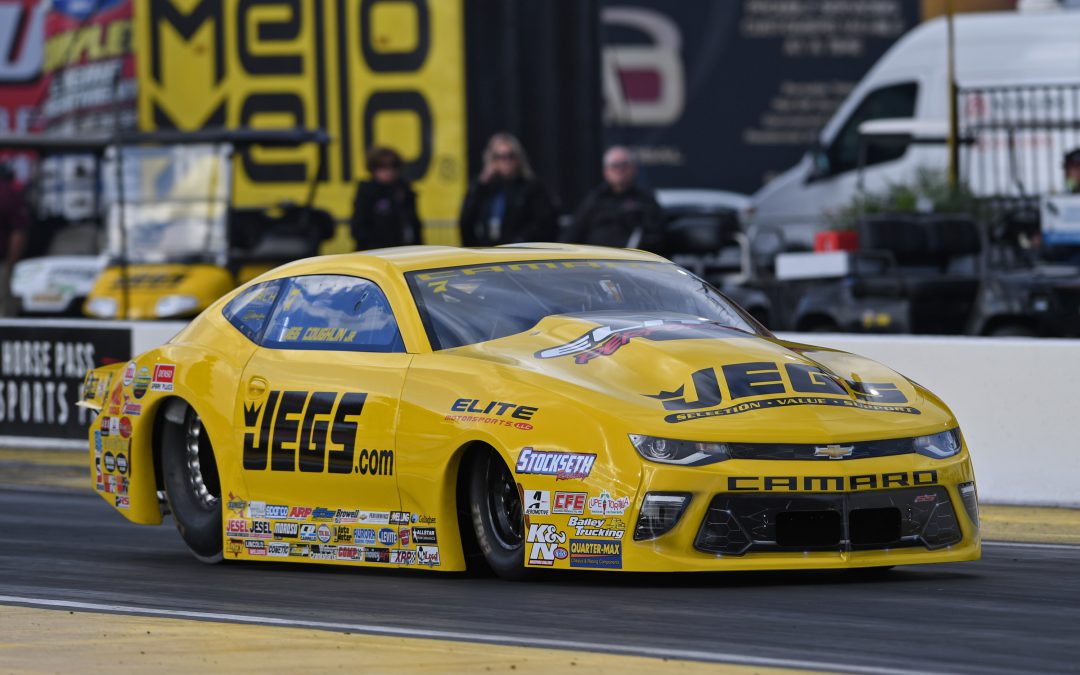 "That final pass definitely felt much better," Coughlin said. "It moved out to the left a little bit and I had to work to get it back in the groove but I could tell as soon as I let the clutch out this thing was screaming. It could have been even better but I hit the rev-limiter in the 4-5 gear change, which is a big no-no, because it's like tapping the brakes, which you obviously don't want to do. Even so, we put an okay number up there.

"We're obviously making some horsepower with these Elite Performance engines with all four team cars laying down pretty decent runs. My car is getting better, for sure."

Coughlin's visit to the Arizona desert, just outside the city limits of Phoenix, has been an up-and-down affair so far. He opened Friday qualifying with a decent 6.582 at 208.84 mph, but his second and third attempts ended in severe tire spin. Fortunately for the 76-time national event winner, his final pass showed his JEGS.com/Elite Performance Chevrolet Camaro is heading in the right direction.

"Q1 was okay, nothing to write home about, but it was enough of a run to give us something to tune from," Coughlin said. "I didn't make it past first gear in Q2 and we were the first pair out this morning, and spun really hard again. Worked on it some more and Rickie (Jones, crew chief) figured out a combination that has us excited."

When Pro Stock eliminations begin at noon, Sunday, Coughlin will line up opposite reigning world champion Bo Butner, who posted a sixth-best 6.532 at 210.34 mph in the final time trial. Butner only made one run quicker than Coughlin's best pass.

"We're going to try and hurt some feelings tomorrow," Coughlin said. "We're optimistic about our chances."

Pro Stock eliminations will air on FOX Sports 2 from 7-10 p.m., Sunday. (Time listed is local and subject to change.)

The multi-talented Coughlin's chance at doubling-up this weekend ended in the first round of Top Sportsman eliminations when he broke out by -.001 seconds against Bryan Warr. Running on a 6.49-second dial, Coughlin piloted Phil Unruh's Top Sportsman Corvette to a near-perfect 6.489-second run, but by running under the posted index, the victory went to Warr.

"We didn't get down the track in the three time trials we had so it was a crapshoot guessing on an index to post," Coughlin said. "It was a last-minute deal driving Phil's car and we weren't 100-percent prepared. The car was driving hard right every time so we put new tires on for eliminations and it was driving all over the place. It probably could have run in the teens if we had the set-up right. Either way, Bryan was a tough draw and he would have been tough to beat any way. He finished fifth in the nation last year. A great driver, for sure, and a super nice guy. I hope he wins it all."