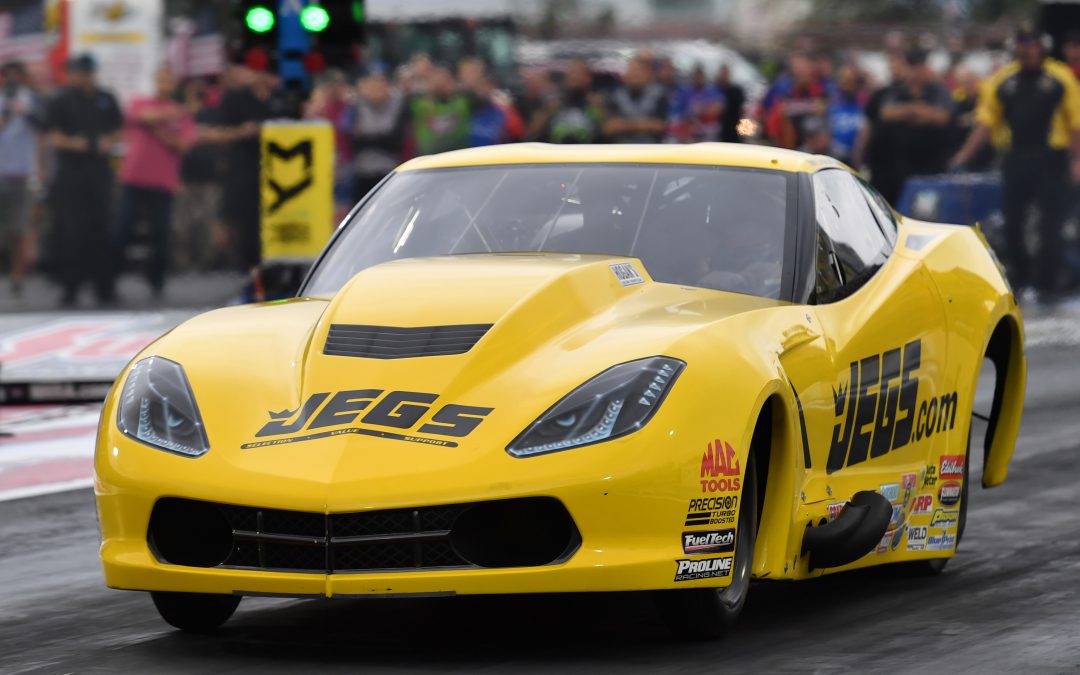 NORWALK, Ohio (June 24) — Troy Coughlin ran the fastest pass in Pro Mod history — a stunning 259.31 mph top speed achieved during a 5.756-second pass — to easily earn the top qualifying spot in the J&A Service Pro Mod Drag Racing Series Saturday in Norwalk. He then scored a big first-round victory over Danny Rowe to further his chase of a third world championship in the popular category.

Coughlin's record run came in the hottest qualifying session Saturday and unseated retired pro Melanie Troxel from the top spot in the record books, a perch she held for six full years since running 258.71 mph on June 4, 2011.

"We are absolutely thrilled to get that speed record," said Coughlin, who hails from Delaware, Ohio. "Steve Petty, Kyle Pettis, Mike Rees, everyone at JEGS, everyone at ProLine, this is for you guys. You've all put in so much effort and it's showing these last few races. Capping it off with this world record makes it all the better.

"Melanie Troxel held that mark for a long time and we've all been fighting through the various rule changes to get back to running those kind of numbers again. To finally get it done, right here in our backyard, is really, really special."

Riding the buzz of the record run into eliminations, Coughlin blasted off the starting line .028 seconds ahead of Rowe and powered away for an easy win, crossing the finish line with a 5.751 at 258.42 mph, well ahead of Rowe's resigned 6.274 at 178.71 mph.

"It's hard to believe we managed to go even quicker because she had her tongue hanging out in that record qualifying pass but we got some cloud cover about 20 minutes before we ran Round 1 and that was all it took to nudge it a little lower," Coughlin said. "This JEGS.com Chevrolet Corvette C7 has been on a rail. I'm just the lucky guy that gets to drive it."

This was Coughlin's third top qualifying effort of the season. He previously led the fields in Charlotte and Englishtown, N.J. He'll now brace for a second-round match-up with Michael Biehle, who won his first-round race with a 5.842 at 255.00 mph.

"Drag racing can be a very humbling spot as we've learned through first-hand experience," Coughlin said. "So we know to make sure we enjoy these times when you're riding high. We're having a blast and I hope we can continue this run tomorrow.

"We're enjoying the fruits of a lot of very hard work. No one gave us anything; we've earned everything we've got right now."

Pro Mod eliminations will continue with the final three sessions beginning at 12:45 p.m., Sunday. Time listed is local and subject to change.